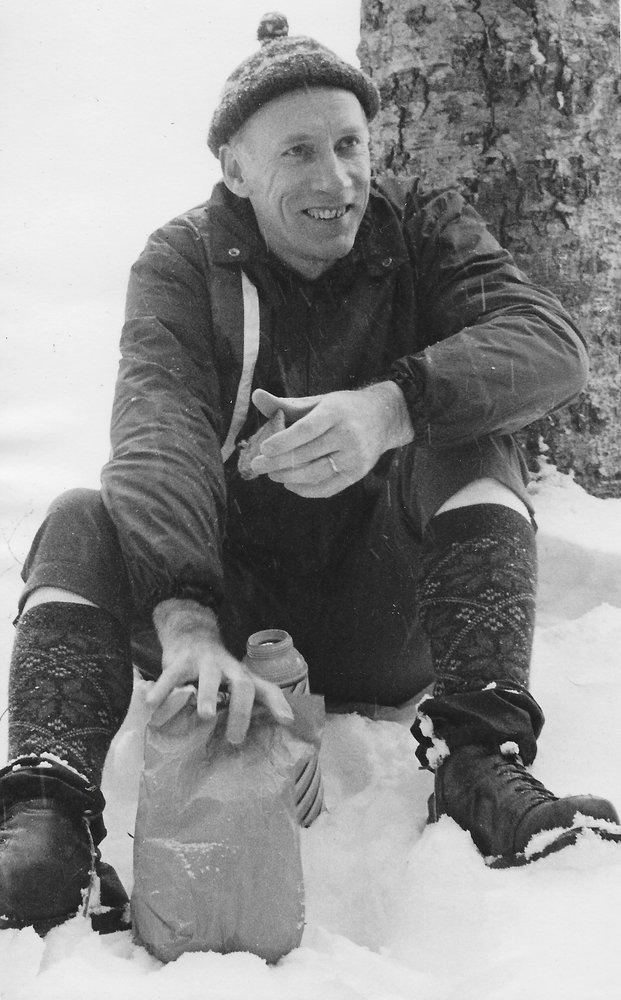 Please share a memory of Lewis to include in a keepsake book for family and friends.
View Tribute Book

Lewis John “Lew” Carlson passed away peacefully at the Quarry Assisted Living facility in Vancouver, WA on January 15, 2019.  He was 94. Lew was born in Grand Prairie Township, ND on October 4, 1924 to Carl and Lena Carlson.  He attended Jamestown College in Jamestown, ND, where he met his wife Fern. He excelled not only academically, but also starred as a three-sport athlete and was named to the Jamestown College Athletic Hall of Fame in 1980.  Lew volunteered for the United States Marine Corp in 1942 and served for two years before being honorably discharged.  After the Marines, he returned to college at the University of Iowa, receiving his master’s degree in organic chemistry.

Lew joined Rayonier in Shelton, WA as a pulp and paper chemist.  It was in Shelton where Lew and Fern welcomed their two sons.  After a quick two-year adventure in St Paul, MN with the 3M Company, Lew brought the family back to the Pacific Northwest in 1962, where they settled in Camas, WA. He began a long and successful career with the Crown Zellerbach Corporation and its many merger-related name changes.  He retired from the James River Corporation in Camas as Vice President of Technology for Communication Papers.

Lew was a proud Norwegian. Whether it was researching his heritage, teaching the language or leading family and friends on tours of the homeland, he greatly enjoyed following his passion.  This included his love of Scandinavian wood carving, spending many an hour at his work bench, creating beautiful figures depicting classic Norwegian characters. He also loved the outdoors, including gardening at home, cross-country skiing or walking with the Osprey Walking Group.

Lew volunteered for the Camas Library Board (including time as Board Chair), was active in the Camas United Methodist Church and was a member of the Sons of Norway Lodge in Vancouver, WA.

He was preceded in death by his wife of 62 years, Fern, his sisters Jessie Carlson, Tilly Hanson and Doris Chase and brothers Ben Carlson and Lloyd Carlson.  He is survived by his two sons Duane (Janice) Carlson of Lake Oswego, OR and Jim (Sue) Carlson of Vancouver, WA.

A memorial service will be held at the Camas United Methodist Church on January 29, 2019 at 1:00 p.m. In lieu of flowers, please consider donations to Friends & Foundation of the Camas Library, Friends of Hospice Southwest Washington or Alzheimer's Association Oregon & Southwest Washington.  To send condolences or sign the online guestbook, visit straubsfuneralhome.com.

To plant a beautiful memorial tree in memory of Lewis Carlson, please visit our Tree Store

Look inside to read what others have shared
Family and friends are coming together online to create a special keepsake. Every memory left on the online obituary will be automatically included in this book.
View Tribute Book
Services for Lewis Carlson
There are no events scheduled. You can still show your support by planting a tree in memory of Lewis Carlson.
Plant a tree in memory of Lewis

Share Your Memory of
Lewis
Upload Your Memory View All Memories
Be the first to upload a memory!
Share A Memory
Plant a Tree