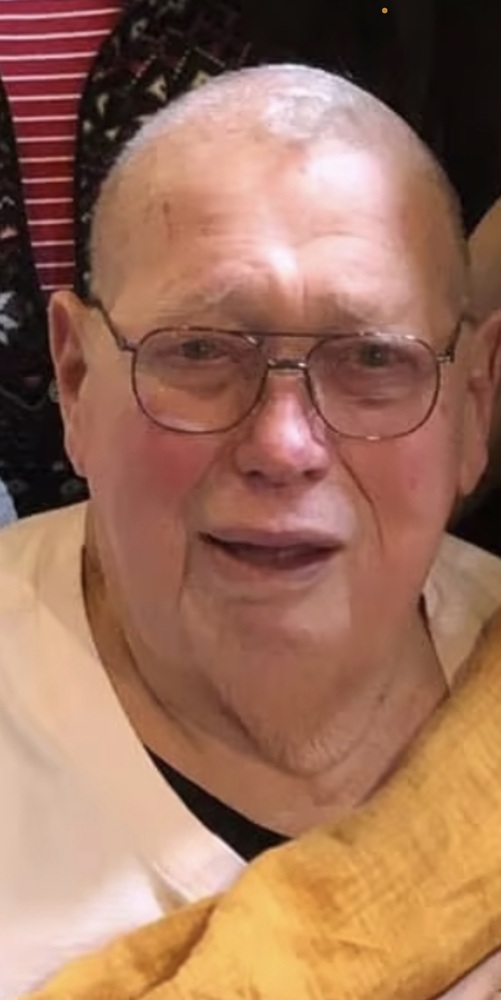 Please share a memory of Nels to include in a keepsake book for family and friends.
View Tribute Book
Nels P. Madsen Sr. Nels was born on October 7, 1938, to Harry and Theresa Madsen in Hickory Corners, WI. Nels, told the story of his birth, as passed down from his beloved Mother, Theresa, that one afternoon she went out to milk their 165 cows and came back a short time later to deliver her 13-pound baby boy, who they named Nels Paul Madsen. He was baptized a month later in Ocento County Wisconsin on the 6th of November 1938. He spent his first ten years or so in Wisconsin before moving with his family to the old town of North Bonneville and resided there until 1960, when they bought the family farm in Skamania. Nels lived on the farm until his death on September 12, 2022. He was proceeded in death by both his parents, his wife Myrtle, whom he was married to for 52 years, his sister Rosalie, brother James, son-in-law Tim Moe and his little dog Molly. Nels is remembered in this life by his three children, Nels Jr. and his wife Melissa, Lena Moe and Mertie Williams and her husband Bill. His seven grandchildren, Heath Moe and wife Kelly, Brittany Nomee, Trapper Madsen, Makayla Bradley and husband Jacob, Matthew Williams, Luke Williams, and Jared Williams. His eight great grandchildren, Hayden and Katelyn Moe, Trinity and Breana Dillingham and Gabe Nomee, Camden Madsen, Emerton, and Ezekiel Bradley. His brother Allen Madsen, sisters-in-law Lois Lindsay and husband Paul, Christine Sobaski and Carol Jewel; as well as numerous nieces and nephews and his little dog Wiggles. Nels was a hard-working man and spent fifty plus years working in the lumber and sawmill industry, including Skamania Log and Lumber Company, Hegewald Timber Company, Hamilton Brothers, and WKO. His favorite job came after retirement, grandpa. He would tell people that “his name was grandpa and spoiling was his favorite game.” He enjoyed being chief chauffeur, giving tractor rides and visiting with everyone. Nels loved to play cribbage and taught his children and several of grandchildren how to play. Being from Wisconsin, Nels was a lifelong Green Bay Packers fan and proud to wear his cheese head; if the Pack was playing, he was watching. Nels recalled fondly the time his family sold their farm and traveled cross country from Wisconsin to North Bonneville, WA in 1946 where he mostly lived until 1960, except a few years they return to Wisconsin and came back. They later moved to the place he has called home for 62 years, his farm in Skamania, Washington. He enjoyed fishing, duck, and upland bird hunting in his younger years, digging clams, and raising cows and pigs. He insisted that we mention the time when he caught the largest fish of his life, a 10’4’ Sturgeon in 1959. Nels loved to dance and most Saturday nights him and Myrtle could be found out on a dance floor, leaving the kids at home to watch Lawrence Welk with Grandma. One of dad’s favorite things to do was cut firewood. He loved it so much that every weekend bright and early he would insist that his children help even though it wasn’t one of their favorite things to do. Nels served his community in many ways over the years. Serving on the Skamania School District #2 board when his kids were younger. He helped build the Skamania County Fire District #5 station and served as a commissioner for numerous years, even driving the stations first fire truck from the factory in Wisconsin back to Skamania. He served on the Skamania County Mosquito Control District board for many years. Additionally, he was an active member of the Shephard of the Hills Lutheran Church in Stevenson. He loved his community, his farm, his children and his many grandchildren and great grandchildren that God blessed him with. Please join us in celebrating his life Saturday, September 24th, 2pm at the Hegewald Center in Stevenson. We would be honored to have everyone join for a potluck after the service. Please bring a favorite dish and memory to share. Straub’s Funeral Home in Camas, WA is in charge of arrangements.
To send flowers to the family or plant a tree in memory of Nels Madsen, please visit Tribute Store
Saturday
24
September

Share Your Memory of
Nels
Upload Your Memory View All Memories
Be the first to upload a memory!
Share A Memory
Send Flowers
Plant a Tree