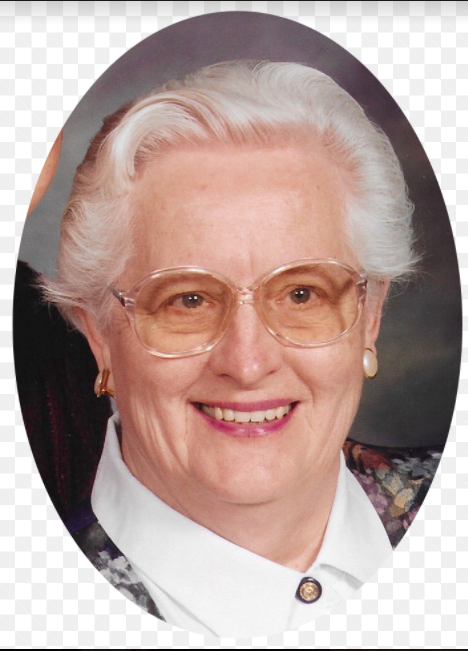 Please share a memory of Marian to include in a keepsake book for family and friends.
View Tribute Book
Marian Elizabeth Buslach (nee Hagensen) passed away peacefully at home among family on Sunday, October 3rd, 2021 at the age of 91. Marian was born to Nis Nissen and Vita Hagensen on September 22nd, 1930, the seventh of 10 children. She was raised in Fern Prairie, Washington, and graduated from Camas High School in 1948. After high school, Marian worked at the local grocery store while saving up for college, and became the first woman in her family to earn a higher education degree. While working, she attended the Vanport Extension of Oregon State University from 1950 - 1952, before transferring to Midland College where she earned her bachelor’s degree in Literature and Christianity in 1955. She returned to Portland and attended Portland State University, where she earned her teaching certification. Marian began her teaching career at Hathaway Elementary School in Washougal, WA. The following year, she taught at Helen Baller Elementary School in Camas, WA and, on November 23rd, 1957, Marian married Fred Buslach. Fred and Marian remained happily married for over six decades, and together had four children, daughters Sally and Betty (Gene) of Camas, WA and sons Kenneth and Joseph (Eileen) of Vancouver, WA. Several years into their marriage, Fred built their family home in Vancouver, WA and Marian began to teach first grade at nearby Minnehaha Elementary School, where she remained until her retirement in 1990. Throughout her career, Marian was not only an educator but a lifelong learner, eventually earning a master’s degree and hundreds of credits in continued education. Prior to the unforeseen difficulties of her last few years, Marian was an active person who liked to keep busy--she enjoyed puzzles and games of all kinds, reading, collecting, canning, laughing, and playing sports. She also loved to watch sporting events and school activities. She faithfully attended games and activities in which her nieces, nephews, children and grandchildren played a part. Along with her husband, Fred, Marian loved to travel and go camping; she was a longtime member of the Good Sam Club and worked and stayed annually at Holden Village Lutheran renewal center. Marian was involved with her local Lutheran churches and synod for most of her life, working as a secretary and youth leader in her earlier years, participating in weekly services as a reader, giving occasional sermons, and volunteering her time as treasurer, Sunday school teacher, and Council Member at her longtime church, Immanuel Lutheran. Throughout her life Marian centered her family and community, and never hesitated to act in service of others. She was a kind, curious, generous, and playful person who had a unique ability to make others--especially children--feel welcomed, seen, and important. Marian’s warmth and spirit inspired those around her and will live on inside of the people her light shone on. Marian was preceded in death by her father and mother Nis and Vita Hagensen, seven of her brothers and sisters, and five of her sisters- and brothers-in-law: Marge and Terry Girvan, Roy and Melda Hagensen, Donald and Frances Hagensen, James Hagensen, Kenneth Hagensen, Eileen Hively, Charles Hagensen, Lois Hagensen, and Laila Hagensen. She was survived by her husband Fred, four children Sally Buslach, Betty (Gene) Dietzen, Ken Buslach and Joe (Eileen) Buslach; two brothers and three sisters-in-law Paul and Betty Hagensen, Maxine Hagensen, Jack Hagensen, and Rylien Hagensen; seven grandchildren Chris Guard, Teresa Guard, Katie (Jacob) Benson, Carly Buslach, Ian Buslach, Jacob Buslach, and Nathan Buslach; four great-grandchildren Payten, Kenny and Maebry Benson, and Malia Adams; and numerous nieces and nephews. A service for the immediate family will be held on November 6 at 2:00. Guests can attend remotely by accessing the live stream at https://immanuelvancouver.org/events/celebration-of-life-service-for-marian-buslach/. For more information regarding the service, visit immanuelvancouver.org. In lieu of flowers donations may be made to Immanuel Lutheran Church, Vancouver, WA
To plant a beautiful memorial tree in memory of Marian Buslach, please visit our Tree Store

Look inside to read what others have shared
Family and friends are coming together online to create a special keepsake. Every memory left on the online obituary will be automatically included in this book.
View Tribute Book
Services for Marian Buslach
There are no events scheduled. You can still show your support by planting a tree in memory of Marian Buslach.
Plant a tree in memory of Marian

Share Your Memory of
Marian
Upload Your Memory View All Memories
Be the first to upload a memory!
Share A Memory
Plant a Tree