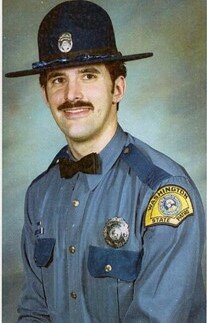 Please share a memory of John to include in a keepsake book for family and friends.
View Tribute Book
John Olan Hess Jr. was born on April 6, 1957 in Lewisberg, Pennsylvania to John Sr., and Jean Hess. After graduating from high school, John joined the Air Force and served as the Munitions Maintenance Specialist with 7 years in active duty and 13 years in the Air National Guard Reserves. While on active duty, John’s assignments assigned him to the Philippines where he met the love of his life, Laurrie. On December 15th, 1979 John and Laurrie were married. In 1980, John and Laurrie moved to the West Coast settling in the Seattle area. On October 25th 1985 John joined the Washington State Patrol as a Trooper. His initial assignment was in Ritzville, Washington. In 1989, John and Laurrie were blessed when their daughter Kayte came into their lives. In 1992, the family moved to the Vancouver area where John was promoted to Detective. John remained in this position until he retired in 2011. After retiring as a Sworn Officer, John remained with the Washington State Patrol as the Evidence Officer. John loved life and contributing to the community. He donated his time to the Evergreen School District, and the Criminal Justice Program for 10 years as both a participant and as a board member. John also donated his time as a member of the Skamania County Sheriff’s Office Dive/Recovery Team. He also loved to teach students Karate and would donate his time to teach on line, or in person in his back yard when he could. John is survived by his wife of forty-one years Laurrie, daughter Kayte (Melissa), mother Jean, sister Deb (Gary), and brother Doug (Lynette). Please join us in a celebration of John’s life on September 25, 2021 at 1 P.M. at the First Church of God, 3300 N.E. 78th Street Vancouver, WA. Due to COVID concerns, there will be no reception. In lieu of flowers, we respectfully invite you to John’s tribute at: gofund.me/fbfb7a73
To send flowers to the family or plant a tree in memory of John Hess, Jr., please visit Tribute Store
Saturday
25
September

Share Your Memory of
John
Upload Your Memory View All Memories
Be the first to upload a memory!
Share A Memory
Send Flowers
Plant a Tree