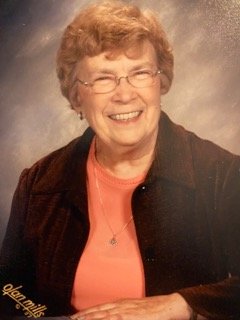 Please share a memory of Bernice to include in a keepsake book for family and friends.
View Tribute Book
Bernice Eleanor Senti Sullivan Pluchos, 92, of Vancouver (formerly of Washougal), passed away at her home on July 15, 2021. She was with members of her family at the time of her death. A Celebration of Life will be held at St Thomas Aquinas Catholic Church in Camas on August 11 at 11 am, followed by internment at Camas Cemetery. Straub’s Funeral Home and Columbia River Cremation are assisting with the arrangements. Bernice was born on January 18, 1929 in Portland, Oregon and resided in Portland until 1959. Her parents were Joseph and Matilda (Michels) Senti. Bernice married Edward Sullivan in 1953 and together they had 4 sons, William, Daniel, Peter and Thomas. Ed passed away in 1971. Bernice remarried in 1975 to Constantine G. (Gus) Pluchos and together they were parents to 8 children (Bernice’s 4 boys and Gus’ 2 girls and 2 boys – Margaret, Patricia, Gregory and George). Bernice was grandmother to 18 grandchildren (1 deceased), and 24 great-grandchildren. Bernice attended Oregon State University and University of Portland, completing her BA in Communications from U of P in 1972, and her Masters in Reading in 1973. Bernice was a high school and elementary school teacher from 1972-1991 in the Washougal and Evergreen School Districts. Always one to be interested in history and writing, Bernice was involved in many civic projects as the first president of the Camas-Washougal Historical Society in 1978 where she also served as its Public Information Officer and editor of the C-W Historical Society Newsletter for the better part of three decades. Bernice also was very involved with the 2 Rivers Heritage Museum Building Committee, a volunteer museum docent, a member of the St Thomas Aquinas Guild and CCD teacher, and a member of the Parker’s Landing Development Committee. Bernice was recognized as a senior representative of the Camas Days Royal Court in 2010 for her work in community involvement. Bernice is survived by 6 of her 8 children, Margaret (Charles) Renwick, Gregory (Kathy) Pluchos, William (Linda) Sullivan, Daniel (Sue) Sullivan, Peter (Mary Sue) Sullivan, and Thomas (Camille) Sullivan. One son, George (Connie) Pluchos and one daughter, Patricia Juravic preceded Bernice in her death. In lieu of flowers, remembrances may be made to the Camas-Washougal Historical Society in her name.
To send flowers to the family or plant a tree in memory of Bernice Pluchos, please visit Tribute Store
Wednesday
11
August

Share Your Memory of
Bernice
Upload Your Memory View All Memories
Be the first to upload a memory!
Share A Memory
Send Flowers
Plant a Tree