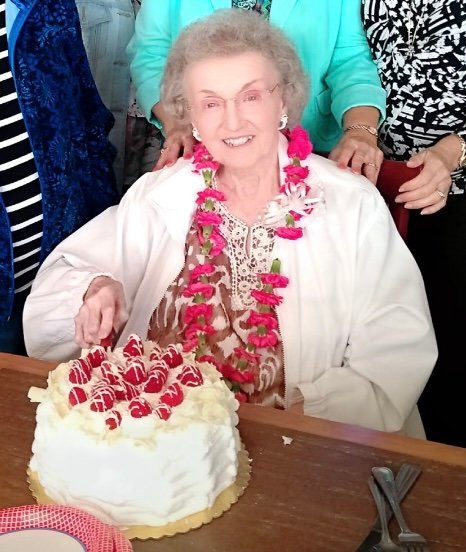 Please share a memory of Maizie to include in a keepsake book for family and friends.
View Tribute Book
Maizie Elizabeth Lanier, 87, of Vancouver, Washington, passed away on March 18, 2021 in Vancouver Washington. Maizie was born in Beardstown Illinois to Beatrice and William Six on August 8, 1933. She went to Beardstown High School and graduated in 1950. Maizie worked several jobs throughout her life but spoke most fondly of her last job as a secretary at a legal office in Lacon Illinois. She enjoyed serving God, her bible study friends, tending to her flowers, and spending time with her son’s families. Maizie couldn’t get enough of her granddaughters, and later in life her great grandchildren. She also volunteered for many years in the maturity ward and gift shop at PeaceHealth Southwest Medical Center. Maizie is survived by her sons; William (Jodie) of Las Vegas Nevada, and Joseph of White Salmon Washington, grandchildren; Sophia Le of Escondido California, Rikki Wintle of Portland Oregon, Jessica Lanier of Kauai Hawaii, Renee Clemmer of Vancouver Washington, and Shelby Lanier of Portland Oregon, great grandchildren; Penelope Pepperdine, Chloe Clemmer, Maizie Le, Gracie Clemmer, Wilder Wintle, and Lauren Clemmer. She is preceded in death by her husband Kenneth of Vancouver Washington, and her parents Beatrice and William of Beardstown Illinois. Funeral service will be held in Camas Washington on April 17, 2021 at 2 pm with Pastor Dave McCabe of Grace Foursquare church officiating. Maizie has been buried with her husband at Willamette National Cemetery. Straub’s Funeral home will be handling the funeral arrangements. Memorial donations may be made to St Jude’s Children’s Research Hospital. The family wishes to extend their gratitude to the Clemmer family for the comfort and love Maizie was given in her final days, and Grace Foursquare church.
To send flowers to the family or plant a tree in memory of Maizie Lanier, please visit Tribute Store
Saturday
17
April

Share Your Memory of
Maizie
Upload Your Memory View All Memories
Be the first to upload a memory!
Share A Memory
Send Flowers
Plant a Tree