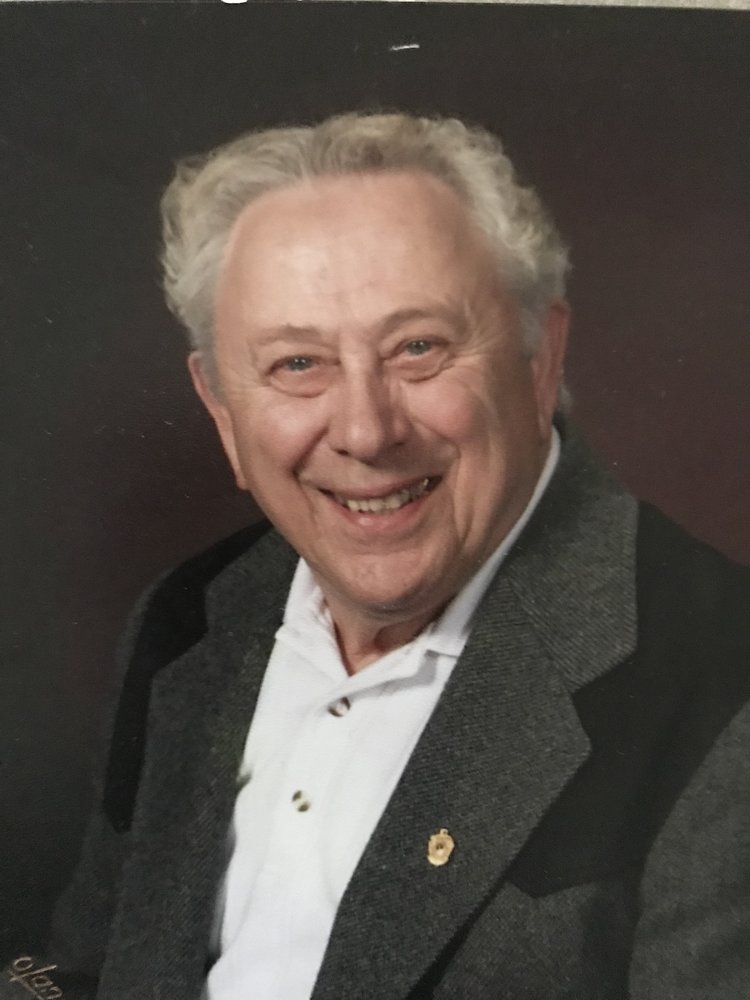 Please share a memory of Ted to include in a keepsake book for family and friends.
View Tribute Book
Theodore James Morris November 3, 1925-October 28, 2020 Ted Morris was surrounded by his loving family as he peacefully passed away on October 28, 2020, just a week shy of his 95th birthday. Born of immigrant parents, Ted used to say that he was “made in Greece and born in America.” Ted was a true “Papermaker.” He made Camas his life-long home and spent his career working at Crown Zellerbach paper mill, retiring in 1992 from the technical department. He also owned and managed the Glamour Room in downtown Camas. Ted graduated from Camas High School in 1944 and then went on to join the Navy. He served in the Pacific during WWII and was witness to the raising of the American flag at Mt. Serabachi on Iwo Jima. Ted also served in the Air Force; was stationed in Japan where he made regular flights to Korea; and earned the Korean Service Medal and the UN Service Medal. While attending WSU in Pullman in 1946, Ted married his high school sweetheart, Maxinne McGill. They shared 59 years of marriage and together raised their three children, Cres, Candy, and Jim. Ted believed in serving and greatly impacted his community by giving back with his time and talents. He proudly served on the Camas School Board for 24 years and played a key role in developing the Sister City program with Hosoe and Hamamatsu, Japan. He also helped launch and support the Community Concert Series for the entire run of that organization. Ted was a member of the Lions Club, Camas-Washougal Historical Society, the Greek Orthodox Church, 49ers RV club, Fern Prairie Modelers, and provided leadership in Little League and Boy Scouts. Ted is survived by his three children: Cresoula (Bill) Leszczynski, Candace Michener, Demetrious (Lindsey) Morris; his sisters Helen Varkados (Portland) and Alex Soldano (Seattle); six grandchildren; and many great and great-great grandchildren. His service, dedication, work ethic, and devotion to family is the legacy that lives on in the four generations he left behind. A family service was held November 4, 2020 at Holy Trinity Greek Orthodox Church in Portland, followed by internment at the Camas Cemetery. The family is ever grateful to the staffs at Columbia Ridge and PeaceHealth Hospice for the care, love, and support given to Ted and his family. In lieu of flowers, donations may be made to PeaceHealth Hospice or a charity of your choice. To sign the on-line guest book or send condolences, please go to www.straubsfuneralhome.com.
To plant a beautiful memorial tree in memory of Ted Morris, please visit our Tree Store

Look inside to read what others have shared
Family and friends are coming together online to create a special keepsake. Every memory left on the online obituary will be automatically included in this book.
View Tribute Book
Services for Ted Morris
There are no events scheduled. You can still show your support by planting a tree in memory of Ted Morris.
Plant a tree in memory of Ted

Share Your Memory of
Ted
Upload Your Memory View All Memories
Be the first to upload a memory!
Share A Memory
Plant a Tree