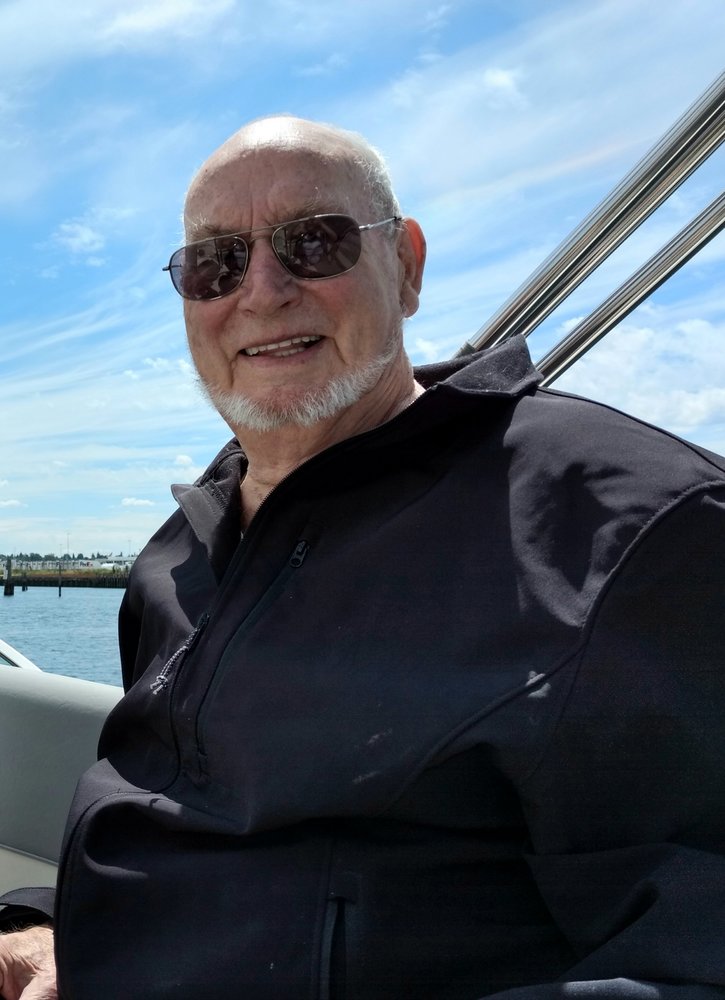 Please share a memory of Frank to include in a keepsake book for family and friends.
View Tribute Book
Frank Wallace was born in Condon, Oregon on October 19, 1932. He passed from this life to Heaven on October 11, 2020, shortly before his 88th birthday. After serving two years in the U.S. Marine Corp, Frank married his high school sweet heart Corrine Restorff. They shared 47 years together during which time they had three sons: Ken (Sandy), Ed (Janice) and Dave (Kasi). Frank and Corrine enjoyed care and share groups with church friends, traveling, ocean fishing and golf. Frank and his son Ken loved hunting together for deer, elk, moose, and bear. Frank and Ed spent some memorable time fishing in The Queen Charlotte Islands. As loving support to their 15 year old son Dave who already had his pilot’s license, Frank and Corrine took flying lessons. They successfully soloed shortly after. Early in their marriage Frank and Corrine moved to Enumclaw and owned and ran a bakery. The next step was to work for Baker’s Associates where he traveled the country as a business consultant to independent bakers. This job took the family to Knoxville, Tennessee. The family lived there for about 4 years and decided it was time to come home to Washougal, Washington. They moved into the old farm house where Frank grew up on his parent’s ranch, taking a job as a route sales person at Carnation. Around 1970/71 Frank and Corrine purchased and operated the Top Burger Drive In in Camas, WA. Ed was allowed to leave the junior high building daily for a hamburger lunch. Ed and Dave’s job at the Top Burger was to peel all of the potatoes for the fries. That added up to about 150 pounds of potatoes per week. Ken took orders, waited tables, and even cooked in the kitchen. Their last endeavor was to own and operate United Fire and Safety in Portland, Oregon. Frank was able to retire in 1989 at age 57, so they were able to spend 10 years doing the things they enjoyed. They took several cruises including to Mexico and Alaska. One of the trips in Alaska included kayaking. They also worked together at the Dunes Bible Camp in Ocean Park, WA and helped to build the church there. Sadly, Corrine passed away in 1999 after a battle with cancer. Frank was a loving and kind husband and caregiver to her until her death. Frank married his second wife Lavonne Lundstrom in April of 2000. Although they were both in their sixties, they were able to enjoy twenty and a half years together. They also enjoyed traveling, especially taking off in their RV and enjoying God’s beautiful creation. One of Von’s favorite trips was to the East Coast where they cruised up the coast to Nova Scotia. They then drove along the Eastern Seaboard through the North East states and into Amish country. Frank kept busy in retirement. He was an avid gardener. He raised a great variety of vegetables in his 200 feet of raised beds and was very generous in sharing them. Frank loved cooking and barbequing. His steaks were unparalleled. Family, church friends and activities were an important part of their life together. Frank and Von, too, spent some time volunteering at the Dunes Bible Camp. In addition to his wife Von, and his sons and their wives, Frank is survived by two step-sons, Jim (Sherry), Leonard (Linda), and two step-daughters, Julie and Connie (Ron). Frank is also survived by nine grandchildren, 11 step-grandchildren, and numerous great grandchildren. We will all miss Frank so very much and can take comfort in the fact that he was a firm believer in Jesus Christ as his Savior. He is in Heaven now and free of the pain he endured the last few years.
To plant a beautiful memorial tree in memory of Frank Wallace, please visit our Tree Store

Look inside to read what others have shared
Family and friends are coming together online to create a special keepsake. Every memory left on the online obituary will be automatically included in this book.
View Tribute Book
Services for Frank Wallace
There are no events scheduled. You can still show your support by planting a tree in memory of Frank Wallace.
Plant a tree in memory of Frank

Share Your Memory of
Frank
Upload Your Memory View All Memories
Be the first to upload a memory!
Share A Memory
Plant a Tree