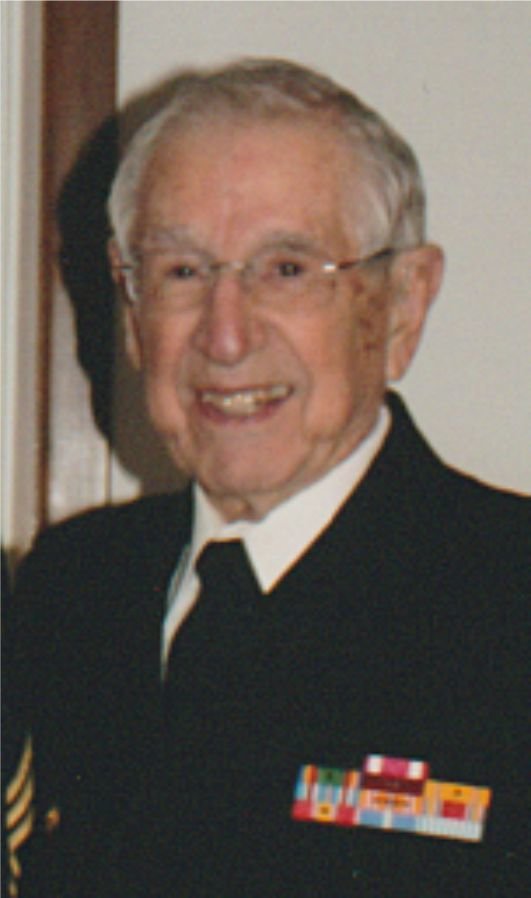 Please share a memory of Ralph to include in a keepsake book for family and friends.
View Tribute Book

Ralph joined the Navy in September of 1939 as a Seaman Recruit and served his country for nearly 35 years. He was stationed aboard the Hospital Ship Solace during the bombing of Pearl Harbor and was aboard ship during several WWII battles. He was stationed aboard the USS Oriskany during the Korean Conflict. Some of his duty stations included Norfolk, VA; Bethesda, MD; San Francisco, CA; Great Lakes, IL; Charleston, SC and Guam.

On Thanksgiving evening, 1944, Ralph married Ruth M. Koch in Oshkosh, WI. She was a dedicated Naval wife and loving mother. They were married nearly 63 years and had three daughters: Carol (Ron Parkey), Lois, and Martha (John Brennan). Grandchildren are Matthew, Nathaniel, Susannah, Emily, Andrew, Hannah, and Will as well as several great-grandchildren. Surviving siblings are his brother, Glenn and sister, Arline Sitter along with numerous nieces and nephews.

After retirement from the US Navy he taught Health Care Management at Chicago Medical School and in 1978 became Coordinator of 2 off campus programs for Southern IL Univ Carbondale. In retirement Ralph was a member of the Libertyville Sunrise Rotary Club, the Pearl Harbor Survivors Association and the Gideons. He was an avid Scrabble and Cribbage player and enjoyed playing golf.

After the death of Ruth in 2007, he married Ferne M. Bottemiller Facey and was married to her nearly 10 years. Shortly after they married, they moved to Washougal WA, where they lived with Ferne’s daughter. Ralph was much loved and tenderly cared for by Ferne’s daughters Lauri (John) and Ruth (Mike) and their families.  Ferne passed away in July 2018 and Ralph continued to live in his home until his death.

To send flowers to the family or plant a tree in memory of Ralph Laedtke, please visit Tribute Store
Saturday
23
March

Share Your Memory of
Ralph
Upload Your Memory View All Memories
Be the first to upload a memory!
Share A Memory
Send Flowers
Plant a Tree