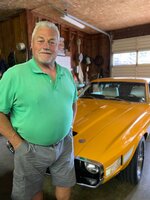 James “Jim” Robert Martell was born on May 23, 1949 and passed peacefully at his home in Washougal, Washington, on June 10th, 2022. Jim was born in Vancouver, WA to Carol (McCuiston) and James “Jim” Martell. He was preceded in death by his parents, Jim and Carol and his brother Rick. He grew up in Washougal, WA and had two younger brothers, Rick and John. Jim is survived by his wife Sharon Kay (Graham) Martell, three sons Clint Martell (Joanne), Jay Martell (wife Rona), and Chris Martell, brother John (children Michelle and Johnny), sister-in-law Sharon (Newberry) Martell, sister-in-law Vicki Baldwin and her husband Murry. Jim enjoyed time with his seven grandchildren Nick, Devin, Erik, Julian, Ashley, Ava and Shelby. Jim was a lifelong resident of Washougal, minus the time he played football at Greys Harbor Community College. Jim was known to be a personable, gentle giant that could light up any room with his infectious smile and charm. He was best known in the community for his vast knowledge of all things mechanical, especially Ford motor vehicles. He retired in 2005 after spending 35 years at the Camas Paper Mill. Upon retirement, Jim and Sharon spent three winters in Arizona, but he missed his shop, where he could be found tinkering on old Fords. Jim’s most recent projects included a pair of his and her mustangs. His, a 1969 Shelby GT500. Hers, a 1969 Mach 1. His final project was a 1957 Ford Custom, which is a replica of the car he drove in high school. Jim enjoyed going to swap meets and car shows both near and far. Sometimes he would take one car, but on special occasions he would have all three cars in the show. He loved all things Ford. Jim enjoyed arm wrestling, fishing, golfing, gambling, nascar, softball and getting his morning coffee and scratch off tickets at the local gas stations. He could be seen at the Washougal High School (WHS) Football games as a member of the “chain gang”. Jim was always smiling and willing to talk cars with anyone. He recently was awarded a medal for Outstanding Citizen of Washougal from Mayor Ramos. With Jim’s lifelong love for classic cars, we invite you to his celebration of life/cruise-in at WHS (1201 39th ST, Washougal, WA) on July 23, 2022, cruise-in at 10:00am, celebration of life 12:00-2:00pm. In lieu of flowers, we ask that you consider a cash or check donation to the Jim Martell scholarship fund. This annual scholarship will be set up in honor of Jim and given to a graduating student from WHS with interest in an automotive tech program.