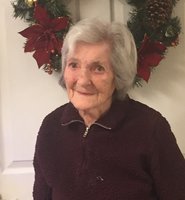 Marjorie Ann Beck passed away June 1st, at the age of 89 years. A longtime resident of the Camas-Washougal area, she leaves a huge void for those who loved and cherished her. Marge was born April 1, 1932, in Camas, WA. Growing up in the shadow of Prune Hill, she spent many summers picking fruit, as many youth did in those days. Her teenage years were filled with music and marching as she performed as a majorette in the Camas High School marching band. One of her joys was reminiscing about her opportunity to march in the Rose Bowl Parade in Pasadena CA. After graduating high school, she worked at the Camas Post Record as a typesetter. It was there that she met her husband, Bob. They shared a love of reporting the news to the community and soon they fell in love with each other. They were married in 1954 and built a family together in their house on the Washougal River. Marge and Bob spent many years living a modest life in Washougal while raising their family of five children. As the family grew, Marge developed her sewing skills to start a side business to help make ends meet. She became particularly skilled with draperies and upholstery. Marge used those skills to create a more formal business in Washougal, opening a storefront in an old mortuary on B Street with some friends. The tagline for the drapery business was “It’s Curtains for you!”, to which she always laughed about with pride. Generous with her time and skills, she beautified many houses with custom curtains and gained a reputation for her high-quality work. Humorously and a testament to the times, she traded window treatments with a local doctor for his services to deliver her youngest child. During their retirement years, they enjoyed traveling the northwest, working at the Treasure House, bicycling, and rollerblading. A highlight of their journeys was a train trip across the country. Stops included Chicago, Washington, DC, and New Orleans, where Marge was impressed by the “oiled up men” in a Bourbon Street bar. She laughed about this for years. In 2003, she lost her husband of nearly 50 years after a bicycling accident. His absence left her heartbroken and looking for a sense of purpose. She found that purpose in doting over her seven grandchildren. In 2011, Marge took the brave step of traveling on the train to visit her youngest son’s family in Maryland. She was very proud of undertaking such a long journey on her own at almost 80 years. Her latter years were spent enjoying friends as they would stop by to visit in Washougal. The front door was always open, a pot of coffee was always at the ready, and people streamed through her living room all day long. She was very proud of her beautiful gardens and worked hard on the landscaping. Marge also had a quirky sense of décor. Her house was adorned with everything from pink flamingos to Betty Boop figurines. Her selflessness and genuine friendship will be sorely missed. Marge is survived by her five children, Laurie, Doug, Wendy, Neil and Andy; and her grandchildren, Ryan, Justin, Trista, Matthew, Tamara, Madi and Peyton. Marjorie's life will be celebrated on Wednesday, July 14 from 2pm to 5pm at the Camas Community Center.