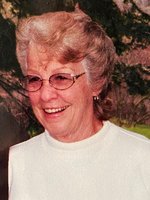 BARBARA JEAN PINKOWSKY Barbara Pinkowsky passed away on March 8, 2021 at her home in Washougal, WA at the age of 83. She was born on January 16, 1938 in Medford, OR. Barbara worked as a stock handler in the technology industry and retired in 1998. In her spare time she enjoyed bowling and fishing. She was preceded in death by her parents, Forest and Dorothy Thomason and son, Robert Pinkowsky. Barbara is survived by her husband, Michael J. Pinkowsky; daughters, Debra West, Darla Haugen, Diana (DeeDee) Allen, Ellen Willard; sons, Dale Haugen, Jon Pinkowsky, Michael S. Pinkowsky; sisters, Julia Seth, Mary Dalbec; brother, Richard Lee Pinkowsky; 15 grandchildren and 21 great grandchildren. Her life will be celebrated at a private memorial service and a private interment will be held at the Camas Cemetery at a later date.