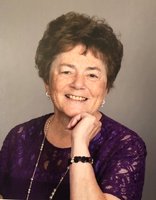 Claudia June(Young) Leick, devoted wife and loving mother and grandmother, passed away peacefully on December 28, 2019 in Vancouver at the Ray Hickey Hospice House. Claudia was born June 28th, 1939, in Camas, Washington to Alfred Paul and Olga Rehal Young. Her childhood was spent in Camas, graduating from Camas High School in 1957 and Western Washington University in 1961, where she also met her future husband, Bob Leick. Early in their marriage Claudia and Bob moved to Stevenson, raising their three daughters and making their home in the beautiful Columbia River Gorge for 32 years. While living in Stevenson, Claudia volunteered her time to Star of the Sea Catholic Church, Stevenson Elementary School, and she enjoyed many years of organizing the annual talent show at the Skamania County Fair. Claudia looked forward to planning family gatherings, especially memorable family beach reunions at Seaside, Oregon, but her time was mostly spent as a conscientious homemaker, and lovingly raising her family. In recent years Claudia and Bob have lived in Washougal where her interests revolved around her seven grandchildren’s activities, educations and careers. Claudia was also an avid follower of her favorite sporting events and she continued her calling as a volunteer for the Catholic church. Claudia is survived by her husband of 58 years, Bob Leick; three daughters, Shelley (Kurt) Lundquist of Bellevue, WA , (and their three children Christie, Stephanie, and Robby), Sallie (Kurt) Schoen of Louisville, KY (and their two daughters, Cheyenne and Daisy) and Susie (Casey) Moltrum (and their two daughters, Brooke and Sydney Moltrum); her brother Dr. Gary (Josephine)Young of Walnut Creek, CA; and sister-in-law, Jacqueline Young of San Francisco, CA. She was preceded in death by her brother, Robert Young. Claudia’s funeral services will be on January 7th, 2020 at St. Thomas Aquinas Catholic Church in Camas. The Rosary will be at 10:30, with the Mass at 11:00. Interment and reception will follow. The family would like to thank the Ray Hickey Hospice House caregivers for their kind and thoughtful care. Until we see you again Junie, we will miss you.