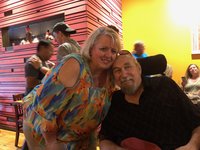 Tim went to work for Kiewit Pacific in his early 20’s and continued with them for 40 years. During that time he held many positions, retiring as yard superintendent. He always said “that his blood ran yellow and black.” If you needed anything he knew how to get it, where to find it at and how to get it done.

Tim had a great sense of humor and a kind heart. He loved to tease his nieces and nephews. His grandchildren said that he was a real jokester. He taught them all at a young age how to give the best “wet willies.” Tim loved dogs especially his companion Angel. They spent countless hours together talking, playing, watching TV, eating snacks and cuddling.

Tim loved music and had seen some amazing concerts in the late 70s and early 80 including the Rolling Stones. You would get into his rig and his radio station was always on KGON. He was a huge sports fan and especially loved football; his favorite team was the Greenbay Packers. He also loved the Superbowl and NCAA March Madness. You could always count on him to have a pool going for a big game.

Tim is survived by his wife Lena; his son Heath, (Kelly) and his two wonderful grandchildren Hayden and Katelyn of Vancouver; brothers Steve; Gary (Cindy) all of Vancouver, sister Jody (Steve) Hymas of Battle Ground, several nieces and nephews; and many, many friends. Tim was preceded in death by his parents and nephew Scott Moe.

There will be a celebration of life on Sunday May 19, 2019 at the Heathman Lodge in Vancouver, WA at 1:00PM. Please sign the online guest book at www.straubsfuneralhome.com.

Tim will be greatly missed by his family and friends, we know that he is at peace.