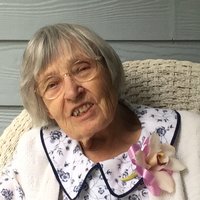 Emma Matthilda Hein was born on January 4, 1926 in Warrick County, Indiana.  She passed away on Tuesday, January 22ndin Vancouver, Washington at the age of 93.  She was the sixth of twelve children born to Ewald and Christina Hein.  The family traveled from Indiana to Minnesota during the Depression and then to Oregon, settling in Washington.  She met Paul Frederick Naffin and married in 1951.  They built their home on Everett Street in Camas, Washington where Emma lived until 2016.  She was known for her kind and sweet personality, strong faith, and culinary skills, in particular, pies and chocolate chip cookies.  Emma was heavily involved in church throughout her life at St. Matthew Lutheran in Washougal and volunteered in numerous capacities at Interfaith Treasure House and conducted nightly devotions for years at the local nursing home. The most important things in her life was the love of God and her family.

She is survived by her children, LeRoy Naffin and wife Darlene, Gregory Naffin and wife Jeaneen, Ted Naffin, Susan Klemetsrud and husband David, son-in-law Kees Groeneveld and siblings Martin and Hugo Hein, Mildred Kuschel, and Hilda Hagen.  She has 8 grandchildren and 14 great grandchildren. She was preceded in death by her husband Paul, daughter Linda Groeneveld, and siblings Gus, Paul, Clarence, Harold, Walt, and Irwin Hein, and Frieda Stevens.

A funeral service will be held on Monday, January 28th, at 11:00 a.m. at St. Matthew Lutheran Church, 716 Washougal River Road, Washougal, Washington.  Luncheon will follow.  She will be laid to rest at Camas Cemetery.  Straub’s Funeral Home & Columbia River Cremation in Camas is in charge of the arrangements.  To send condolences or to sign the online guestbook please visit www.straubsfuneralhome.com